Portrait of an intellectual practician 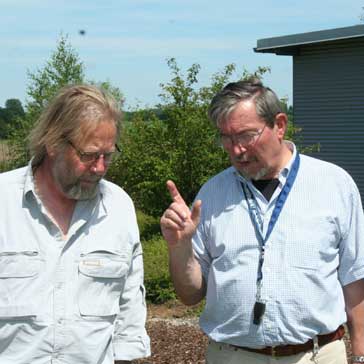 Prof. Dr. Dr. habil. Kord Ernstson, born in 1942, is a well-known German geophysicist and geologist and professor at the Universityof Würzburg.

At the Christian-AlbrechtUniversityin Kiel Kord Ernstson studied – amongst other subjects – geophysics, physics, mathematics and geology and was awarded his doctorate there in 1974 in geophysics with a thesis on the Nördlinger-Ries impact crater.

In 1976 he took over the teaching of geophysics at the Julius-MaximilianUniversity, Würzburg and led a number of the research projects promoted by the German Research Society on geophysics and geology.

In 1985 he received the habilitation (German title based on additional post-doctoral research and giving post-doctoral lecture qualification) for geology and since 2000 holds the professorship at the Universityof Würzburgwhere he supervised numerous diploma and Ph.D. theses. In addition he worked as visiting professor at different colleges and universities.

A number of the focal points of his researches should be mentioned here: regional geology and geophysics, the fracture mechanics of rocks as well as in particular impact research with the investigation of large meteorite craters. He has studied the Nördlinger Ries impact crater, the Steinheimer accumulation lake and the Chiemgau meteorite crater stray field in Germanyas well as the Rochechouart crater in Franceand the Azuara and Rubielos de la Cérida impact structures in Spain.