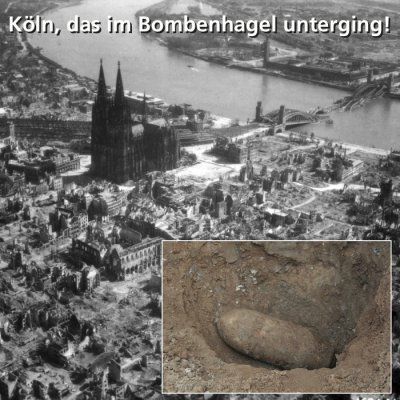 Around 65 years after the end of the war, it would be assumed that grass would now have grown over the explosive past, but that’s not the case at all. Over recent times, the relics of the war have frequently made headlines; in the media, there have been more and more press releases and news reports about discovered bombs.

They clearly show that the terrible inheritance of the last World War is omnipresent and, in the truest sense of the word, explosive. Some of the relics currently hidden are in a very serious condition. Hidden underground or underwater, the ravages of time are taking their toll on the material and detonators, which is not making the explosives any less dangerous.

The find at the harbour in Neuss at the end of March 2012 shows the explosiveness of this topic; the unexploded bombs are said to have been heavily corroded with the propellant leaking out explosive, according to reports in a daily newspaper at the time.

The ever greater risk not only affects the specialists in the bomb disposal units when carrying out their job. The general public is also significantly affected!

The inner workings of an unexploded bomb primarily consist of highly toxic chemicals. If these escape from the dilapidated iron shell, it results in dangerous chemical reactions and contamination of the ground and waters. Instead of decreasing, the risk of self-detonation (long-period delay detonators or explosive crystals) actually increases seriously with advancing age.

Often, the bombs are found purely by chance, such as when the Rhine was at low water in Koblenz in summer 2011. In many places, plots of land are examined as a preventative measure before any construction work if post-war aerial photographs indicate impacts or fighting in the area or there are reports from witnesses.

Ebinger develops modern searching equipment that, compared with the previous technological developments, often enables more efficient inspection, even in populated areas. The most recent development is the UPEX® 745 P2I, a system that offers versatility (the inspection of areas and boreholes) and exceptionally high detection range for large explosive devices.

For instance, in Osterspai, Rhineland-Palatinate, in August 2011, a 500kg flying bomb, which could not be detected magnetically, was inspected at a depth of around 3-4m, although standard technologies were unable to detect it.UPEX® 745 P2I Since then, numerous magnetically indifferent bombs have been found.

Cologne, like many other cities, underwent heavy aerial bombardment by the Allies during the Second World War. The night of the 1,000 bomber raid, also known as ‘Operation Millennium’, remains etched in people's memories.

During the war, according to information by the Allied Western powers, the total weight of the bombs dropped over Germany is stated at around 1.9 million tonnes.3 During around 260 heavy air raids, millions of bombs fell over Cologne, although precise figures can only be estimated. It is assumed that one in every 10 bombs remained in the ground as an unexploded device.

The greatest clearance efforts were made immediately after the war and prior to reunification.

However, even in recent decades, the German bomb disposal unit has undertaken a great many clear-up operations.

“We identify with our innovative city, Cologne, which was almost completely destroyed during the Second World War, including in the night of the 1,000 bomber raid. This is where our roots lie,”

We would like to thank the City of Cologne NS Documentation Centre for its kind assistance.